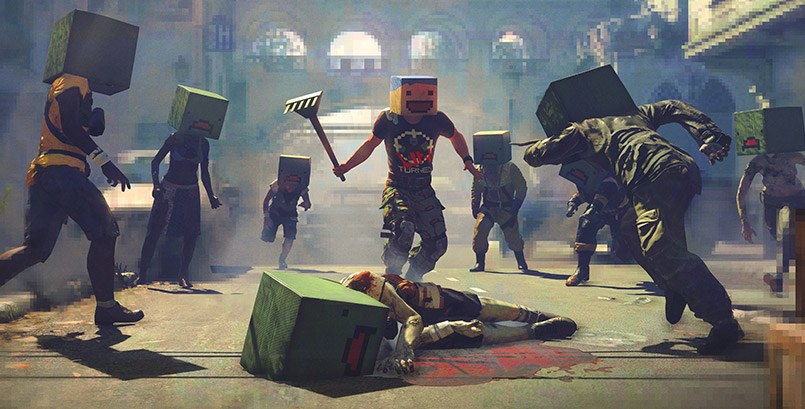 Guess who gets to clean up the mess after the Unturned Convention held in Harran has gone horribly wrong.

When Unturned fans kicked off their huge convention in Harran, they had no idea things were going to get terrifyingly real (and definitely too high-poly!) in a matter of hours. Now they are walking the streets among other flesh-hungry zombies, some still wearing their Unturned costumes like grotesque cosplayers from hell.

To help contain the situation, you need to take out as many Biters, Virals, and Volatiles as you can, so gear up and slash away! When the community reaches the global goal you will be rewarded with three gold weapon dockets. We know steering clear of Volatiles is generally healthy for you, but if you have the guts to go after them to complete your personal bounty, you’ll earn three King mods. Speaking of rewarding your efforts, you’ll also receive double XP during the whole Unturned crossover event (which ends on April 6, 19:00 CEST).

While the crossover event is only available on PC, every Survivor regardless of their platform will be able to enjoy the free Unturned Weapon Pack. It’s already available on Steam (console versions coming late April) and offers three completely new “low-poly” weapons modeled after Unturned items (Rake, Machete, and Hockey Stick). Their extreme durability makes them perfect for a starting player (they do scale to your level though!) or as almost indestructible backup weapons, but thanks to their quite high critical hit chances they’re fun for everyone. Oh, and you also get a unique Unturned-inspired outfit.

If you don’t want to participate in the event, you can turn it off in the main menu (Options > Online > Community event participation).